Producer-Director Neerraj Pathak announces biopic on Maratha war hero Madhusudhan Surve at Shivtar, Khed The Date: June 20. Circa 2005. Churachandpur, Manipur. “Where is my khukri,” asked a calm Commando Madhusudan Surve alternating between consciousness and unconsciousness, morphine barely helping him in his unbearable pain. Taking his khukri, he cut the remnants of his left leg till the knee. “Now bandage it,” he commanded. “The reinforcements come only tomorrow.” Surve walked home on two feet as he predicted to his doctors. Only one was a Jaipur foot, the other leg had an iron rod and his stomach had artificial intestines. The enemy could hurt his body, but his spirit was the same as ever! Cut to Circa 2022. 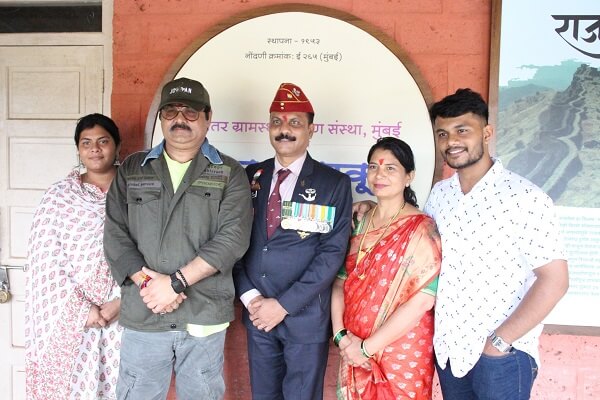 Writer-Producer-Director Neerraj Pathak is all set to immortalise the life of this war hero, and decides to launch the mega biopic at Surve’s village Shivtar, a village seeped in patriotism. “India will always remain free as long as it is the home of the brave like Madhusudan Surve,” says an emotional Neerraj Pathak when the Maratha war hero chooses to honour Neerraj with a shawl. The director admits that it gave him goosebumps when he heard that Surve, even when from the hospital pre-amputation surgery, called his wife to say he was injured while playing football and will take four days to connect back! No one other than those around him could fathom that he was in a life meets death situation. More about Madhusudan Surve… Madhusudan Surve is a former Paracommando, or a lethal soldier handpicked to operate behind enemy lines and thwart enemy defences. He was trained to carry out intelligence correction, subversion and sabotage of vital enemy infrastructure and communication through deep penetration and surgical strikes behind enemy lines. But what makes Surve a true soldier is not the fact that he can recite the nomenclature of a machine gun or a grenade launcher, or that he has learnt to use his hands like weapons and weapons like they were his hands. It is the fact that even as a child, patriotism coursed through his veins. Surve joined the army to do twice the work of a civilian, drawing half the pay and yet feel Jana Gana Mana vibrate through his body even as a half-boy, half-man army lad. The same Jana Gana Mana reverberates in every classroom in Chhatrapati Sambhaji Raje Sainik School in Khed, where today, young boys do a march past heading to the martyr stambh that honours the martyr sons of Shivtar village. Shivtar village in Khed taluka of Ratnagiri is known as the village of soldiers. The tradition of joining the Indian Army from every house in this village continues even today. Almost every family in Shivtar has men serving in the Army, in fact, war hero Madhusudan Surve’s ancestry has donned the military uniform. Among the Indian soldiers who died in the First World War, 18 brave soldiers were sons of this village, and a majority of the residents are still serving in the Army. The village high school has classes named after heroic forts of Maharashtra. Fitness clubs are a norm and the youth take great pride in serving the army, police and medical fields. The then British government built a heroic memorial of the martyred soldiers in Shivtar to remember their contributions to the country, their bravery and valor was witnessed by Neeraj Pathak and Commando Surve. The majority of the sons from this village are still serving in the Indian Army; in fact, Commando Surve’s family has had multiple generations in the Army. 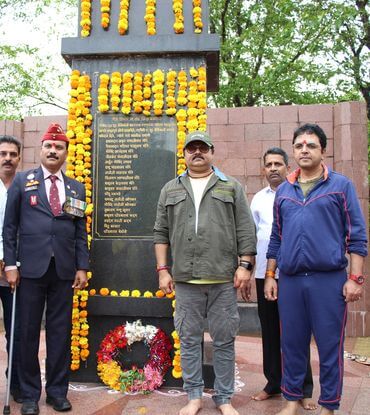 The villagers proudly say that they have been given the opportunity to join the Indian Army since their school days. In fact, the high school in the village has classes named by the names of forts in Maharashtra, well established fitness clubs and students who all respect and understand the brilliance of the soldiers serving their country. Not just the Army, the youths of the village are also serving the country in the police forces and medical fields. Coming from a village of soldiers, Commando Surve’s own service and skills as a commando shine with the support of his village. He has been on duty on Operation Rhino in Assam, Operation Rakshak in J&K, Operation Vijay in Kargil, Operation Orchid in Nagaland and Operation Hifajat in Manipur, where he and his team eliminated over 32 militants despite him losing a limb and being near fatally wounded. He also was on a UN peacekeeping surveillance mission in Congo, South Africa. His family also has its next generation working to serve the country. His son is preparing for the NDA and his daughter is working in the medical field. As for Surve, the true patriot is content that he has been awarded the Shaurya Chakra for his extraordinary fight against the Naxals in Manipur in 2005, and has served six years after the incident, retiring from active duty in 2011. “There are only winners in war, no runners-up. A soldier either hoists the tricolour or comes back wrapped in it. Madhusudan Surve’s bravery is awe-inspiring, the reason I took the rights to his biopic. But much as I love making this film, I truly wish it was a fictional story and not a biopic,” Neerraj Pathak trails off. HINDI ARTICLE Big Biopic Announcement !

Set to Thrill!! John Abraham to Produce and Lead An “Attack”.

Alia Bhatt is the youngest actor among the top 10 influential Indians.

On the 25th anniversary of ‘Hero No. 1,’ producer Jackky Bhagnani and his team rewatch the film and celebrate