Skip to content
You are here
Home > Featured > Nawazuddin Siddiqui wishes his Thackarey co-star Amrita Rao for her big win at Dadasaheb Phalke Excellence Award 2019 for best debut in Marathi!

Thackarey, that released on January 25th, 2019 in Hindi and Marathi languages was a massive hit at the box office. Nawazuddin, who played the Balasaheb Thackeray in the film had the ensconed actress Amrita Rao play Meenatai Thackeray who was the sena chief’s wife. 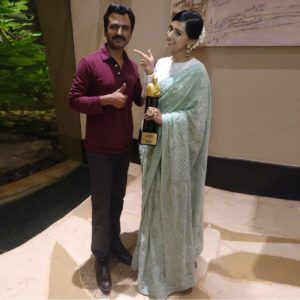 According to the sources, Nawazuddin was the first one to congratulate Amrita Rao on her big win at the Dadasaheb Phalke Excellence Award for her role as Meenatai Thackeray in the celebrated biopic. He specially called Amrita and extended his wishes while the actress was on her way to the award ceremony on Saturday evening.

Interestingly, it is a sheer coincidence that, post the award show, the actress went to attend a family wedding at a posh suburban hotel and Nawaz had come with his family to have dinner at the same hotel and the two actors met in the hotel lobby.

Amrita fondly recalled that it was this month last in 2018 that she and Nawaz were shooting in Palghar for Thackeray and a year later she was standing besides him with the Phalke Excellence Award in her hands.

The actress feels proud that Dadasaheb Phalke, who is known as the father of Indian cinema was Marathi and being conferred with the Phalke excellence on her Marathi debut is both symbolic and a huge honour.

This TV Actress will be back on big screen with a bang soon after working with Mithun Chakraborty?