Skip to content
You are here
Home > Featured > MTV Unplugged is a mix of coming up with a new intersecting organic version of a song and yet keeping the soul and energy of the original version, says Kalyan Baruah!

Hails from the land of tea, Assam, Kalyan Baruah is one of the leading guitar player and producer of our Indian music industry. Kalyan Baruah, who has been associated with MTV Unplugged for eight long years reveals, “It is important to retain the originality of the song with the limited acoustic instruments available to you. It’s a mix of coming up with a new intersecting unplugged version and yet keeping the soul and energy of the original song.

Talking about his music journey, Kalyan Baruah says, “I was always inclined towards music, arts and culture as all my family members are into Film and theatre in Assam. I am blessed to have that inclination too… music is something I’m passionate about….” I did complete my studies in Anthropology and studied to get a job in Administrative Service, as being from a middle class assamese family , that’s what the society expected you to do…but soon realized that ..this is not something I wanted to do for the rest of my life. So after a few brief encounter with corporate jobs, I quit and dived full time into music. 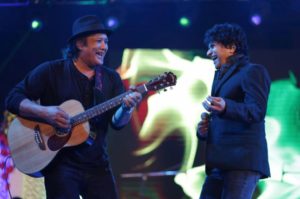 Sharing about his Bollywood innings, he tells, “When I was in Assam , I started with my own rock bands and also got involved with the budding recording industry of North East…I was one of the pioneering Musicians in Guwahati who actually thought for the first time , that we could live off Music as a career, specially being a studio recording artist…

After 10 years or so, I moved to Mumbai as , naturally , I was looking to expand my musical horizon .I knew few friends like Salim , Toufique in Mumbai. They helped and guided me a lot in my initial days.. Those days of early 90’s, I wasn’t doing mainstream Bollywood as I was very busy doing advertisement/ albums and live gigs in various clubs in Mumbai…This is the time I worked with albums of KK, Lucky Ali, Silk Route and so many others..

Moving to mainstream Bollywood was a natural progression as everyone from the non film recording industry was looking for a bigger canvas for their music and was slowly being absorbed into the Film Music genre and contributed their innovative and non traditional musical brilliance to the music of the film industry.
As a producer , I guess I came out of the box in a movie called Kaho Na …where lucky asked me to produce his two songs in the film. Over the last 25 years or so, in the recording industry , I have worked with everyone in the field..like Salim Suleiman, Vishal Shekhar, Mithoon, Pritam, Sachin Jigar, Jeet, Vishal Bhardwaj, to everyone..and every known singers of the country.

And talking of MTV unplugged, this is my eighth season .I have been part of MTV unplugged from the first day, first shoot till today…Its amazing to be with a bunch of talented musicians, singers and to play live with them. These days, it’s a rare opportunity to interact with another musician like that..MTV Unplugged, Coke studio has given the musicians a chance to experience that without thinking of the commercial aspects of it. In these eighth seasons of the MTV Unplugged I have produced..Papon, KK ,Farhan Akhtar, Ayushman Khurana, Ami Mishra, Amit Mishra, Neeti Mohan, Jonita Gandhi, Sidharth Mahadevan, Sachin Jigar, Shahid Mallya, Badshah, Arjun kanaut to name a few…