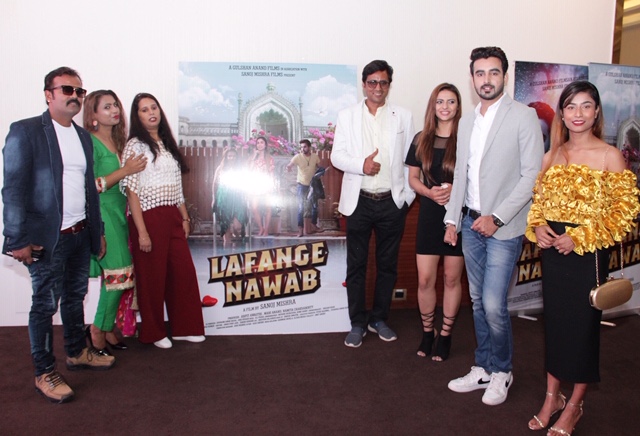 Drama and thrill has been the first choice of viewers in Bollywood. The first glimpse of the film, Lafange Nawaab had been launched in Mumbai on 15th December,2018. Under the banner of Gulshan Anand Films, Lafange Nawaab is a film of suspense and mystery genre.  On this occasion, the film’s main artist Robin Sohi,  Ritam Bhardwaj ,  Larissa chakz, producer Arpit Awasthi, Mahi Anand, Namita Chakraborty, director Sanoj Mishra, music director Ali Fasal and executive producer Vivek Agarwal were present. 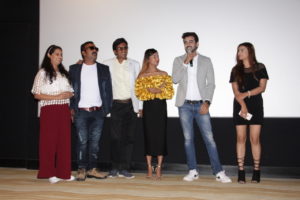 Lafange Nawaab is a suspense drama film shot at Lucknow and Mumbai’s beautiful location. Robin Sohi, Ritam Bhardwaj Larisa Chakza, Nisha Shrivastav will be seen in the lead roles in the film.

The story of Lafange Nawaab revolves around Yug and his father Singhania, the city’s biggest businessman. Singhania is a famous businessman of the city and always wants his son to be the heir to his business but Yug has a musical band with  his 4-5 friends and  doing small programs in the city which his father consider it as trivial. He insists Yug to join his business and leave the band as his friends are not his true one. They are with him till he has money and fame. To teach him a lesson his father plans a fake murder of Ammie who lives at their house. He assures him (Yug) that in the process of cleaning the pistol he accidently murdered Ammie and asked him to dispose the dead body with the help of his friends. But none of his friends, whom he considered as his best friends, come forward to help them and finally they both dispose the body. His father insists him to check the dead body of Ammie as they both were supposed to get married. When he checked the sack bag, there was a dummy instead of Ammie’s body. His father then reveals the truth that he created a fake murder scene to realize him about his fake friends. Yug apologized his father and they both return to their home. As soon as they reach home they found someone has informed the police. Singhania tries to convince them it was a fake murder and wrong news and was quite assure that the information must be shared by Yug’s friends. The police take them to the murder spot and found Ammie’s dead body. In the murder of Ammie, police arrest Singhania and this is the climax of the film. Who has murdered Ammie? Will Singhania and Yug be able to come out of the conspiracy, what is the truth? 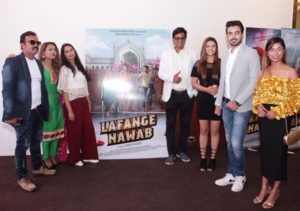 On this occasion, producer Mahi Anand said that “Lafange Nawaab is the first film of our production house Gulshan Anand Films, I dedicate this film to my father. In the Lafange Nawaab, the viewers  will get the complete dose of suspense, thrill  and mystery.”

Director Sanoj Mishra said that the film “Lafange Nawaab is a film created for today’s audience, and the film’s suspense will keep the viewers till the end of the film. The songs of Palak  Mucchal, Shaheed Mallya, Deepak Sharma and Pushpendra Singh will be very much liked.”

Bolo Hau, a Love Story with Hyderabadi Tadka to hit the theatres soon.