Off lately, a lot of reports and speculations about Nawazuddin Siddiqui have been making rounds. A lot of rumors speculating about the actor signing various films and taking up different kinds of roles are being circulated.

A recent report stated that the actor was taken on board for a South film starring opposite a  Megastar but he left it. Then there was one that said Nawaz walked out of Vishal Bharadwaj’s film. Some reports also stated that an actress will be making her directorial debut with Nawaz.
Now the recent one of Mr. Nawazuddin Siddiqui being a part of a thriller.

However, Nawazuddin Siddiqui’s agency, Magic IF Films has slammed all such reports and has put an end to all the rumors making rounds about the actor.

In an official statement released on their twitter handle, Magic IF Films states:

*”Off late there have been a lot of rumours of Nawazuddin Siddiqui doing this film that film, this thriller that thriller. We at MIF hereby clarify that he is been busy with his ongoing film #THACKERAY & initial promotions of #MANTO.” 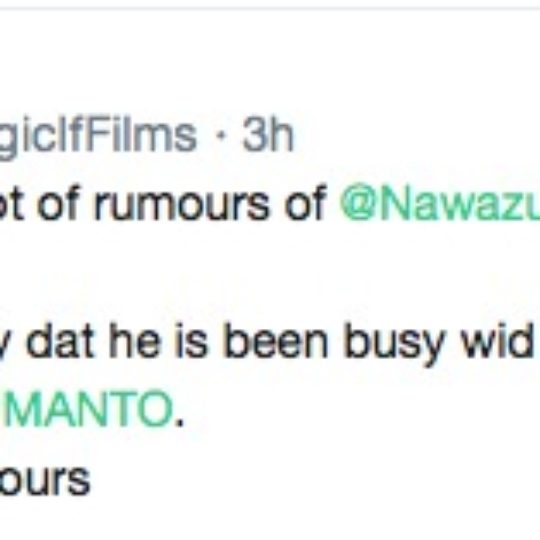 The moon landing of “Chandrayaan – 2” will be accompanied by Neil Nongkynrih’s very own “Vande Mataram”, sung by the Shillong Chamber Choir

Veteran actress Rita Bhaduri departed for her journey beyond!

Blessed to be part of cinema and doing such a fantastic film like Choriyan Choro Se Kam Nahi Hoti – Rashmi Somvanshi!