All through 2020 in an era of the pandemic, Zee Theatre brought teleplays across multiple genres right into our cosy living rooms. Here is an overview of some of the best offerings

Makrand Deshpande’s much-loved classic, Sir Sir Sarla is the story of Professor Palekar and his student Sarla – the pretty, innocent young girl who seems to be enamoured by her mentor – and Phanidhar who shares a love-hate relationship with the professor. The play explores the bond between the students and their professor, which faces many ebbs and flows. Secrets are revealed, accusations are thrown, and the three lives remain interwoven for many years to come. The teleplay stars Makarand Deshpande, Aahana Kumra, Sanjay Dadhich and Anjum Sharma.

Radha is to wed her beau Siddharth at her ancestral home in the hinterlands while her enthusiastic family members and their wedding planner are trying to make the wedding resemble like the ones in Bollywood! The play uses wit, humour, music and drama to bring out extremely relevant challenges faced by families and individuals, especially against the backdrop of a big, fat wedding. The play stars Joy Sengupta, Nidhi Singh, Siddhant Karnick, Loveleen Mishra, Harsh Khurana, Sarika Singh, Monica Gupta, Niranjan Iyengar, Mallika Singh and Nivedita Bhargava. It is written and directed by Purva Naresh.

Written by Swadesh Deepak, the play follows the story of a junior ranked army man, Ramchander, who one day, picks up his gun and shoots down his two senior officers. The army now orders a Court Martial against Ramchander, to prove his crime and decide his punishment. The play comprises the proceedings of this Court where the defence lawyer, the extremely sharp Bikas Roy, played by Rajeev Khandelwal, goes deep into the motive behind the assault and exposes the ugly and shocking truth. Also starring Govind Pandey, Bhagwaan Tiwari, Saksham Dayma, Swapnil Kotriwar. 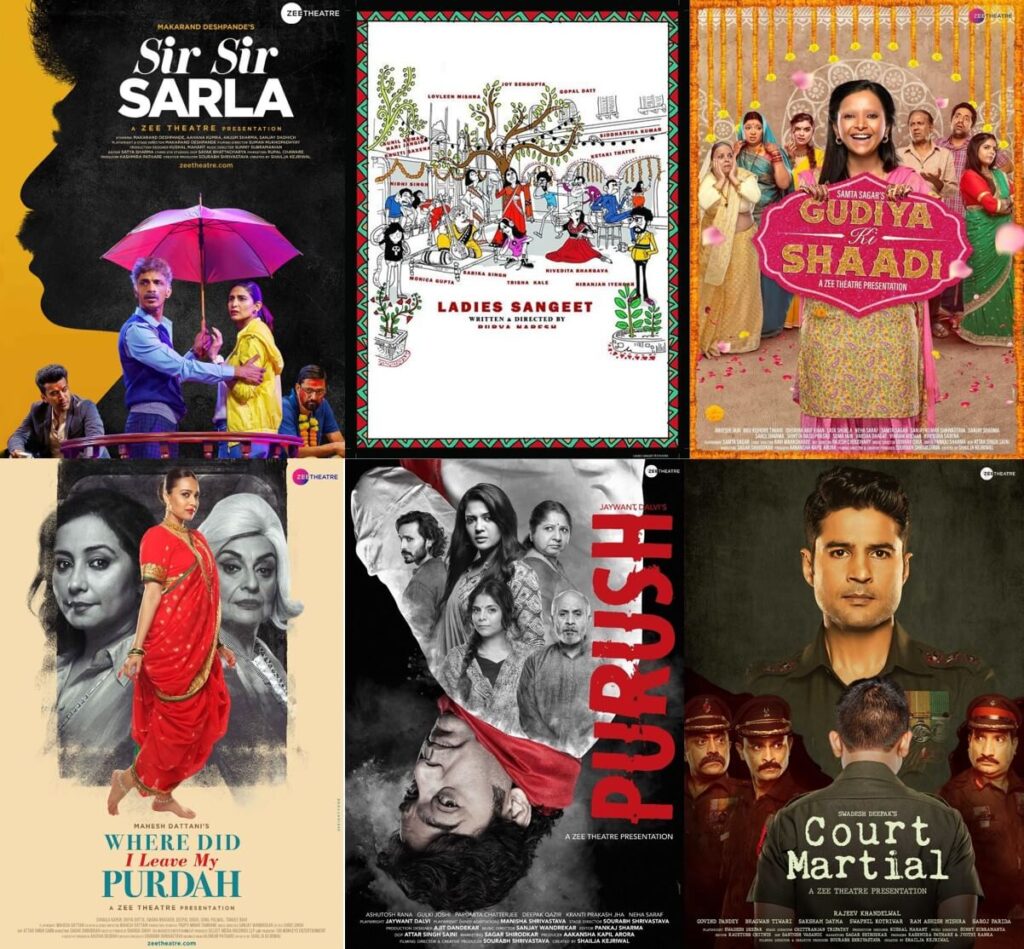 The teleplay takes a light-hearted jab at the standards of beauty set by society, especially with regards to women. Shweta Basu Prasad plays the lead role Gudiya – a strong and confident girl who is proud of her skin colour and is seldom affected by the judgemental society, but soon her happy-go-lucky life takes an unusual turn on the most important day of her life – the wedding day. A mix-up in the shampoo leads to Gudiya losing her eyebrows and her sweet Indian wedding turns into a pungent comedy of errors. The teleplay is directed by Sourabh Shrivastava and stars Virendra Saxena, Samta Sagar, Ishtiyaq Khan, Saroj Sharma, Neha Saraf, Vikram Kochhar and Anveshi Jain

Purush is a social commentary on universal issues of gender politics, patriarchy and caste discrimination. Set in Meerut, UP, in a middle-class Brahmin home, the teleplay creates a layered narrative as the plot explores a number of glaring ideologies that plague men as well as women in Indian society. In a regressive and unyielding scenario, Ambika not only fights for herself but also stands up for other women who are subjected to injustice or oppression. Her fight against the corrupt and misogynistic Gulab Singh is aided by others like her who never give up and eventually find a way to gain justice. The teleplay stars Paromita Chatterjee, Deepak Qazir, Kranti Prakash Jha and Neha Saraf.

Where Did I leave my Purdah?:

Where Did I leave my Purdah? tells the riveting tale of Nazia, a once-famous stage diva, who decides to direct a modern adaptation of Shakuntala. The story moves between her past and presents revealing hidden anger and former passions. Directed by Sahitya Akademi award winner Mahesh Dattani, the play stars Swara Bhasker, Divya Dutta and Sohaila Kapur in lead roles.

ALIA BHATT CHAMPIONS THE WELFARE OF STREET CATS AND DOGS