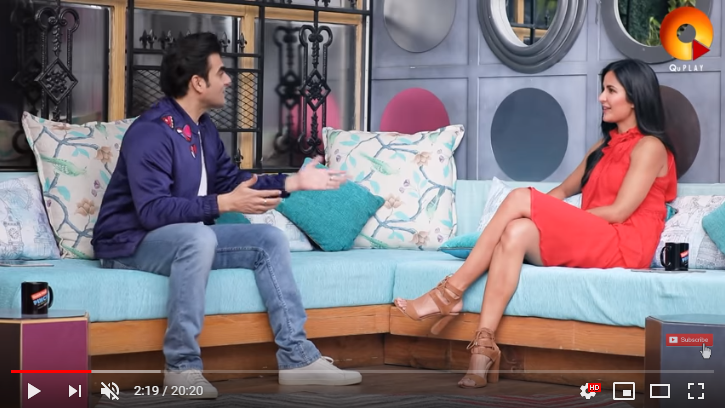 For the longest time, Katrina Kaif stayed away from social media. However, once she finally made her Instagram and Facebook debut , the actress has been a rage on social media. Amongst one of the most followed actresses on social media, Katrina’s feed is full of stunning pictures along with posts which share a glimpse into her real self.
Katrina recently appeared on Qu Play’s TV’s Pinch, a chat show which is hosted by Arbaaz Khan, where she spoke all about dealing with social media praise and criticism, and what she truly liked. During the conversation, Katrina revealed that according to her, a video of her, in which is can be seen doing one hand push up, and even at point, doing push ups without hands. While audience was mind-blown with her fitness level, it was later revealed that it was actually a prank. Her trainer was lifting her using a plank, and according to Kat, it was the best video ever.

During the conversation, she also revealed her social media mantra, and how she felt about constant criticism of item numbers.

You can watch the full episode on

Produced by QuPlay, Quick Heal Pinch by Arbaaz Khan has 10 episodes of approximately 20 minutes each and will be streamed weekly on QuPlay’s YouTube channel. The show is written and directed by Abbiy Obheroii. Other celebrities on the chat show include Karan Johar, Sonam Kapoor, Sonakshi Sinha, Nawazuddin Siddiqui, Kareena Kapoor Khan, Varun Dhawan, Kapil Sharma to name a few.