Janhvi Kapoor was awarded with ARETS STJERNESKUDD (shooting star of the year) given for recognising new talent, by Royal Norwegian Consulate General.
Janhvi graced the event looking stunning in a blue saree. She was accompanied by her father producer Boney Kapoor at the event who was also the guest of honour along with Janhvi at the event organised at Metro Inox, Mumbai. 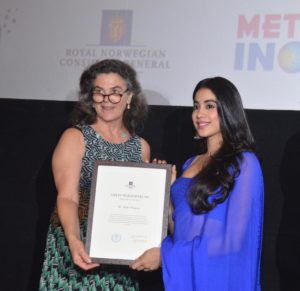 There were few Thalassemia patients from an NGO who presented two painting of Sridevi and Janhvi as a gift to the actress.
Announcing the award, Ann Ollestad, the Consul General said: “Your performance in ‘Dhadak’ was excellent and we would like to recognise your talent in Norway on behalf of the Royal Norwegian Consulate General, I would like to call you the Shooting Star of the Year.”
Elated Janhvi said, “I would like to thank the Norwegian Consulate for having me here. Any kind of recognition means world to me. I hope to keep doing good work and make you all happy.”
Producer Boney Kapoor said, “I feel elated and very proud to see achievements of my children, my family.” 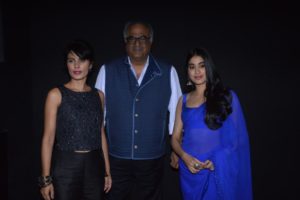 On the work front, Janhvi has two big films in her kitty, Karan Johar’s Takht and air force pilot Gunjan Saxena’s biopic alongside Dulquer Salman.
The event was followed by screening of two Norwegian films that included Iram Haq’s ‘What Will People Say’. The film is Norway’s official entry to Oscars this year. Iram Haq was present at the event too along with co-producer of the film Guneet Monga.

This Throwback Picture of Divya Dutta and Salman Khan Will Refresh Your 90’s Memory!