Skip to content
You are here
Home > Featured > Indian embassy in Netherlands organizes a special screening of Manikarnika to celebrate women’s Day!

Kangana Ranaut’s Manikarnika: The Queen of Jhansi is a perfect example of patriotism and courage, and tells the story of a woman who was empowered in true sense of the word. The film received applause both in India and overseas and made over 150 crores worldwide. 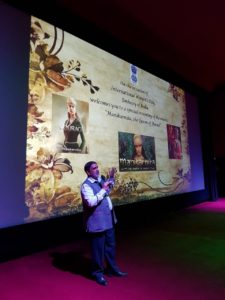 There have been many special screenings of the film, and recently, on the occasion of International women’s day, Indian Embassy in Netherlands organized a special screening of Manikarnika which was attended by the ambassador and other dignitaries.

To celebrate International Women’s Day, the Embassy of India organized a special screening of the movie “Manikarnika, the Queen of Jhansi” on March 8 at Pathé Buitenhof, The Hague which was well attended by ambassadors & other dignitaries. #InternationalWomansDay2019 pic.twitter.com/HBHc8Laf4J

After the success of Manikarnika, Kangana Ranaut is currently in a yoga camp post which she will dive into the shoot of Panga and wrap up the film by May. She will also be seen in Mental Hai Kya, and has also announced that she is working on the idea of a female warriors trilogy.

I am still hungry as an actor: Prosenjit at IFFI