After Cinestaan India’s Script Contest Win with his ‘Ishqlogy’ and being awarded by Bollywood Superstar Aamir Khan, here is an another good news for Assam screenwriter-playwright Rajdweep. Leading news magazine of the country India Today has featured the young writer as ‘Young Leader’ in its 31st December, 2018 issue, which was recently unveiled by Chief Minister of Andhra Pradesh Chandrababu Naidu at India Today Conclave. India Today has published the exciting journey of Rajdweep , from the playwright of Assam’s unique mobile theatre industry to the winner of India’s biggest script contest .

In the article titled ‘Stage Craft, Young Leaders’, India Today says ‘Rajdweep’s work has now got national recognition, with his screenplay ‘Ishqlogy’ ranked fourth among more than 3,500 scripts in the first edition of Cinestaan India’s Storyteller’s Contest. What made the success sweeter was that the jury included superstar Aamir Khan and filmmaker Rajkumar Hirani.’ It also mentions, ‘Back in Assam, Rajdweep doesn’t need the Bollywood tag as his plays run to full houses everywhere. The mobile theatre groups travel to 80 locations every year.’

Adding to this joy for the young writer, All Assam Students Union (AASU) also mentioned Rajdweep’s success as one of the greatest achievements by any ‘Assamese’ in the year 2018. In the annual event called ‘Ashar Assam’ by the student organization of the state, Assam, the success of Rajdweep both in mobile theatre plays and also in cinestaan contest win has been mentioned.  A small town boy, Rajdweep born and brought up in Dhing, a small town in Nagaon District of Assam.  ‘There is not a single cinema hall in 30km radius of my village, but it could not affect my passion for cinema’, say Rajdweep. 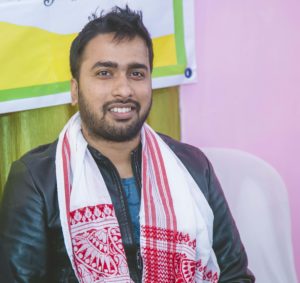 Born in 20th September, 1986, Rajdweep did his schooling at Dhing and later moved to Guwahati, where he completed his master degree in economics from Cotton College. Later, he did his master in mass communication & journalism under Gauhati University.

Rajdweep always wanted to be a writer. This dream taking him to great heights as he recently proved his writing skill in India’s biggest script contest. “I have been a big fan of Aamir Khan. So it was so special meeting him and talking to him before the award function,” said Rajdweep.

Rajdweep who made his debut as a script-writer with ‘Khel – the Game’, an Assamese move by Ashok Kumar Bishoya in 2015. He has also penned a number of scripts for popular plays which have been staged across the State in various theatres. He has also already written songs for Konkona Sensarma directed ‘A Death in the Gunj’ and ‘Jagga Jasoos’ of Anurag Basu. Rajdweep award winning script ‘ISHQLOGY’ deals with an interesting conflict between trust and science. It has been a beautiful love story blended with some real incidents those occurred in different parts of India. Apart from this Ticket-to-bollywood Award, Rajdweep has been the first lyricist from Assam who wrote song for bollywood films. He has been the lyricist of “jiri jiri’ song of the film ‘A death in the gunj’ and the bihu song of ‘Jagga Jasoos’. He also penned the much talked song ‘Memories’ which was sung by Papon & Music by Nucleya for MTV dewarist.

Rajdweep started writing songs from his college days. Later he started his career as a journalist in a reputed Assamese daily where he continues to work. He stepped into the field of entertainment as a lyricist and then into the field of mobile theatre as the youngest playwright soon. He brings out new wave in mobile theatre industry by his innovative ideas & stories. Meanwhile, he also put his mark on the big screen with the popular Assamese film ‘Khel- The Game’, for which he wrote the script, dialogues, and the screenplay. In spite of being a newcomer in the industry, Rajdweep found a fair space in unique mobile theatre industry of Assam. He has written superhit assamese plays like ‘Boliya Krishna’, ‘Breaking News’, ‘Bonoriya’, ‘Akou Edin’. Bauli Mur Priya’ etc for various leading mobile theatre troupes. Rajdweep also has to his credit some of the most popular songs of the Assamese film industry, including ‘Pokhi Pokhi Mon Mur’, ‘Khuje Khuje Jibon’, ‘Bixakto Suma’, ‘Nonsense Hridoye’, ‘Likhi Likhi Gola’ etc. He penned songs for popular assamese films like ‘Rowd’, ‘Bahniman’, ‘ Raag’, ‘Dur’, ‘Nijaanor Gaan’, ‘Ahetuk’, ‘Deuka’, ‘Dooronir Nirola Poja’, ‘Raktabeej’, etc.  After having a magical career in Assam both in films and mobile Theatre, now Rajdweep’s step into Bollywood really makes all of us happy and hopeful. Expecting a lot from this young writer.

Urvashi Rautela snapped in all red, arriving in style at Mumbai airport.