Skip to content
You are here
Home > Featured > “I feel like a fool, says Mirzapur actor Divyenndu on short film Fatafat by Zee 5 originals!

Actor Divyenndu  who was last seen in Mirzapur series now is in short film Fatafat by Zee  5 originals , directed by Parijat Joshi , produced by Navjot gulati (versova hustler) and nishu khurana which released on 1 April .  Also Ishtiyak khan will be staring in this film. 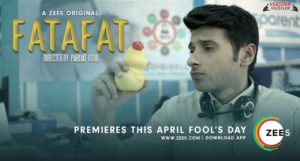 On talking about the film Divyenndu has shared, “I’ll tell you honestly more than to talk about my character Fatafat is about a feeling. The film is all feeling it has all the components of a film in terms of story ,screen play, characterization . But for the most important thing stands out about Fatafat is the feeling. It brings a very sweet smile on your face. When I saw this was my reaction. I don’t know how people will react accordingly. Had alot of fun shooting this one.You know we shot the film in just 2 days, which was quite Fatafat but when I saw the film it was like sipping a cold glass of sweet lime juice on a hot Sunday afternoon!’ It’s about how a struggling call center employee’s life changes when he stumbles across a salesman in a bus. He is very restless as a character so they name Fatafat . You there is a line in this film which says, ‘Aaram bhi chahiye woh Bhi Fatafat’ So it works with that kind of attitude.”

I feel like a fool! (laughs)
But a happy fool like is khushboo Wala fool. It’s a nice feeling to have something like this in a short film as an artist and experiment a little bit with character and subject. I feel really special. When do a short film or something like this , I feel very connected with the project. Very much excited!”, Divyenndu further adds.

Director Parijaat Joshi shares, “Anxiety , impatience is an issue we all deal with in today’s fast paced lives.. we wanted people to sit back and understand the real reason and the simple solution behind it, all this in a very entertaining way.
‘ Sabr chahiye woh bhi fatafat ‘, this irony is what led us to make a quirky fun short that will keep you entertained throughout while subtly hinting at a larger issue.”

This short film is premiered today 1 of April on zee 5 originals.