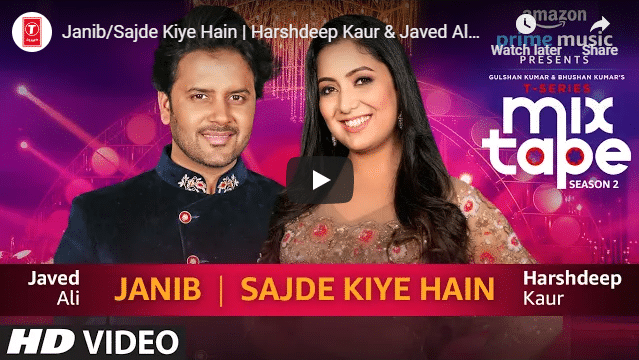 Singer Harshdeep Kaur requires no introduction, after her recent songs have been part of every wedding like Banno re banno, Nachde Ne saare, Dilbarao among others, she is back on MixTape with singer Javed Ali for an ultimate wedding mix! Produced by Bhushan Kumar, singers Harshdeep Kaur and Javed Ali perform on a melody of three songs, ‘Sajde Kiye Hai Lakhon’ from the movie Khatta Meetha and ‘Janib’ from the movie Dilliwaali Zaalim Girlfriend and a part of the song ‘Kabira’ from the movie Yeh Jawani Hai Diwani.

Given their background and training in music, the magical touch that Harshdeep and Javed Ali add to this rendition is mind-blowing. The two songs fill you with glee as both singers put forward a great show as. To give it the right feel, Indian instruments like the shehnai and tabla were also used along drums, piano, bass guitar, keys and percussion. After being a part of high-profile weddings and her songs being performed too at almost every wedding, this mix will definitely be another addition to that list.

Associating herself with MixTape for the third time, Harshdeep Kaur shares, “Our track is a mashup of very popular wedding songs, like Sajde Kiye Hai Lakhon’ which was originally sung by me and Janib. There is also a small part of the song Kabira from Yeh Jawani Hai Diwani, which was also originally sung by me. The feel and treatment of the songs are different. I am collaborating with Javed Ali for it and had a great experience recording it.”

Talking about MixTape and music going the digital way, she further shares, “Today’s generation is always hooked on to the phone, so that’s the first place you get notified about a new song or project. It’s great because everyone has music on their hands.”

Javed Ali known for hits like Kajra Re, Guzarish, among others shares, “This is the first time I am associating with MixTape. We are doing a mashup of three tracks, Sajde Kiye hai lakhon, Banno re Banno and Janib. I have used two different textures of my voice for this track. It sounds like one song, as each one flows into the other beautifully.”

Music Director Abhijit Vaghani comments, “We thought of having a wedding track this season. The song was planned in a way that it could be a slow entry for the bride entry and people can use it for wedding. As an instrument, I have used the shehnai because it is associated with weddings. There was no one better than Harshdeep Kaur for it because she recently did a few wedding tracks and would fit the bill beautifully. We included her track Banno re Banno, just as a feature. Along with Javed Ali, their performance was great because both of them are rock solid singers. This was a shaadi track.”

Watch the latest episode in Harshdeep Kaur and Javed Ali’s voice only on T-Series Youtube Channel, directed by Ahmed Khan and conceptualized and developed by Shivam Chanana and Sonal Chawla. Also, listen to the song on Amazon Prime Music ad free for a voice enabled listening experience.