Mumbai, 4th Nov 2018: International Singer-Composer-Song Writer Pawa’s Global Peace Concert of Musical Mediation based on Lord Buddha’s philosophy is launched by Chief Minister today. Pawa had released a music album Sambuddha- Evoking Buddha’s Spirit through global music couple of years back and got an overwhelming response from the listeners across the globe. This album portrayed how Lord Buddha and his teaching of Dhamma can open a new channel for Global Peace.

The album was number one hit and much appreciated by each and every person who listened it. Pawa has involved various musicians from Europe,UK and USA in this project with melodious blend of fusion music. Pawa had dedicated this album to todays hope for mankind and whose teachings have made a deep impact on him , His Holiness the Dalai Lama. We have seen Pawa’s enormous potential as a Multi- faceted musical entertainer through his musical movie Jhamela before this. 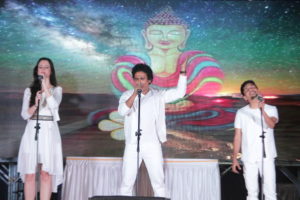 Pawa is delighted with huge and massive numbers of audience during various worldwide launches of Sambuddha’s show including Germany in past 2
years. Packed auditoriums and halls gave remarkable feedback about spirituality connection of this Lord Buddha’s message of peace.

Now,based on these Sambuddha,s meditative and spiritual music Pawa has introduced world’s first ever theme of Musical Mediation. Soothing tracks based on Lord Buddha’s teachings for welfare of all human beings like Sukh (Happiness), Shraddha (Faith), Pavitrata (Purity),Kaary (Action) & Sanskaar (Enculturation) is part of this journey of peace.

Pawa has artfully mixed Buddhist chants of Pali language with it’s Hindi and English meaning which is the major highlights of this peace concert. Music Artists like Sam Mendelsohn from USA, Nira Suarez from Spain, Matylda Bajer from Poland , Yutika Verma from Mumbai are accompanying Pawa in this unique journey of Musical Mediation. 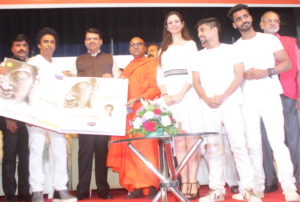 Pawa is willing to spread these meditative thoughts of Lord Buddha, musically far and wide and across the boundaries of countries and continents. The journey of Sambuddha has been truly fascinating and will surely reach at far front corners of the world in near future.

This Global Peace Initiative by Pawa & team will certainly bring the peace and harmony in everyone’s life. Pawa has made a sincere and a devoted effort to spread the message of Peace through this peace concert and he hopes people accept this humble effort with open heart and he is sure that this music will take them to a journey of peace and an easy meditational state of mind. 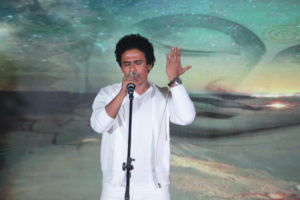 At the occasion Singer-Composer-Song Writer Pawa quoted “I am honoured and overwhelmed with the love and support of audience to my global peace initiative and i am looking ahead to spread my musical meditation of lord buddha’s philosophy worldwide.

Today’s launch event was one defining moment of my life with Hon. Chief Minister Devendra Fadanvis.”