Skip to content
You are here
Home > Featured > From fanboy to co-actor, The Tashkent Films actor Prashantt Guptha reminisces his bond with Mithun Chakraborty!

Actor Prashantt Guptha still reeling in disbelief working face to face with icon Mithun Chakraborty. The young actor who has previously impressed in hit films like Neerja and Issaq, and recently cast in a Hollywood film A New Christmas is gearing for his next big release The Tashkent Files which is slated to release on April 12th, 2019. 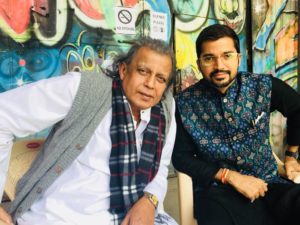 Prashantt Guptha, who will be seen in the film sharing the screen space with Mithun Chakraborty shares, ‘Mithun da became a superstar with Disco Dancer, and when I was a 6 year old kid, went to see him perform live at Madison Square Garden in New York, same place where Micheal Jackson had performed. I walked into a stadium of 20,000 people and he was dancing to Krishna Dharti Pe Aaja Tu. From that moment to be doing a film with him, sitting shoulder to shoulder and talking for hours is a great feeling.”