Film Bandhu Participated at Goa Film Bazaar 2018,  seek creative collaboration with filmmakers
Goa, 24th Nov 2018 : The Goa Film Bazaar is considered as a paradise for the film makers. Film Bandhu, an initiative of Uttar Pradesh government, was the topic of discussion amongst the film makers.
Many remarkable film makers were present at the Goa Film festival and their response towards the Film Bandhu was quite impressive the veteran film director Ramesh Sippy  quoted that the policy and initiative by the Uttar Pradesh government for the cinema  is highly praise worthy. Through this policy the budding film makers are also in the league of producing and directing meaning films. It is seen that sometimes due to lack of financial support the talent remains buried but this policy of Film Bandhu also gives them the platform to showcase their talent. He further said the government should also consider those film whose budgets is more than 100 Crore, so that if the film does not perform well on the box office ,the less burden of loss be levied on the film makers. The director of comedy film, David Dhavan also visited the Film Bandhu stall and talked about shooting his film in Lucknow in anytime soon and remembered his student life which was spent only in Uttar Pradesh. 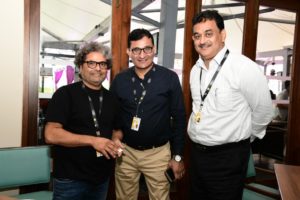 On this event  Shishir Singh, ( Information director and secretary Film Bandhu ) said that under the governance of Yogi Adityanath, the cultural  department of Uttar Pradesh is galloping. The initiative of Uttar Pradesh is giving a huge platform to the film makers. The government is providing assistance to the film makers if they shoot their film in Uttar Pradesh. He had invited all the film director and producer present at Goa Film Festival. He further said the according to the guidelines of Film Bandhu, one can get a subsidiary of upto Three crore twenty-five lakhs. Not only this if the film cast consist of Uttar Pradesh based actors, they will be provided additional subsidiary of upto Fifty lakhs. Moreover, for establishing a film training institute ,the government is providing subsidiary of upto Fifty lakhs. Further he talked about the facility of online application under a single window scheme .Shishir said that till now they had received 330 film proposals ,out of which film script of  172 films had been proposed in front of the government. The government had provided subsidiary for 57 Films till now. 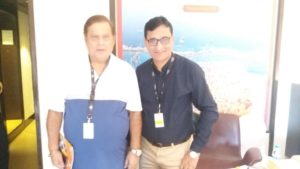 Dinesh Sehgal, joint director of the Film Bandhu said that we have received proposals from more than 200 films and on an average shooting of more than ten films every month has been scheduled at the different locations in Uttar Pradesh. Dinesh Sehgal, excited by the response in the Goa film Bazaar, said that the film producer cannot remain untouched by the festival happening once in a year. With this thought we have brought our film Bandhu’s policy among those creators.
In the meantime, the film writer Dhiraj Mishra, who has shot four films in Uttar Pradesh, said that during pious festival of Kumbh, he will start the shooting of his project Moksh in Allahabad for which the Film Bandhu has given him assurance that he would be fully assisted. The film producer like Vishal Bharadwaj and Sanjay Bhutiyani also came at the stall of film Bandhu, the Lucknow based actress Kanchan Awasthi, said on the stall that due to the government’s policy, local artists have received a lot of encouragement. The producer of film Gaalib film, Ghanshyam Patel has said that he will choose Kanpur for his next film Ganga. 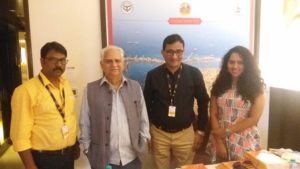 The senior assistant Gyan Das Arya told that we wanted to help not only Hindi but also other regional languages, provided they meet our guidelines.

Cinema4Screen, a New breed in Town