Skip to content
You are here
Home > Featured > FICCI FRAMES 2019 facilitates a breakthrough deal in the Content Market space! 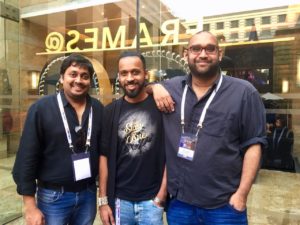 This is an India-Netherlands-Singapore co-production together with Rinkel Films, Magic Hour Films, and Chennai-based Stray Factory, which originated the project based on a short story by acclaimed Tamil writer Dilip Kumar.

The deal happened at the FICCI FRAMES content market, an initiative that was taken last year to introduce festival programmers and key buyers from across the world to a highly curated slate of new Indian films.

The co-production deal was delivered and concluded during Day 3 of the FICCI Frames Market 2019. Stray Factory had previously announced a deal for Vijay Jayapal’s “Nirvana Inn” with Aurora Media during the Asian Film Market in Busan in 2018, which is currently in post-production.

They had concurrently also signed an option agreement for a Korean-Indian feature project also helmed by Jayapal. The co-production on “Nasir” seals a three-picture slate deal between Justin Deimen’s Aurora Media and Mathivanan Rajendren’s Stray Factory.

Mathivanan Rajendran, the founder of Stray Factory says, “Nasir is an important film for the times we live in, the honesty and integrity of the filmmaker and the story is what has attracted our collaborators and made this small story with a big heart from Coimbatore a truly International Collaboration with partners from Netherlands & Singapore.”

Justin Deimen, Managing Partner of Aurora Media Holdings says, “Arun is one of the brightest talents in India and his command of the cinematic language is astonishing for someone of his age. I’m ecstatic that we were able to close the deal for one of the most soulful projects we’ve come across with great partners on board. We thank FICCI in facilitating the process through their platform. This beautiful independent Tamil language feature film from Coimbatore has now gone through Mumbai, Dubai, Netherlands, Singapore and now onto the rest of the world.”

Stray Factory’s next production “Freddie’s Piano” will star Lydian Nadhaswaram, the 13 year-old Piano sensation who is making waves on CBS “The World’s Best”.