Skip to content
You are here
Home > Featured > Dr. Sohini Sastri Launches her First Book on Astrology in Mumbai

On the evening of an eventful night at Hotel Leela, Dr. Sohini Sastri, an internationally acclaimed Astrologer, launched her first-ever book on career astrology that talks about observations on careers and profession. Dr. Sastri first presented the book to the Chief Guest of the event, Ms. Preity Zinta and later to the audience. Appreciating Dr. Sastri’s efforts and achievements in the field of astrology, Ms. Zinta congratulated her and asked many questions pertaining to the success and failure of one’s career and remedies on offer through astrology. 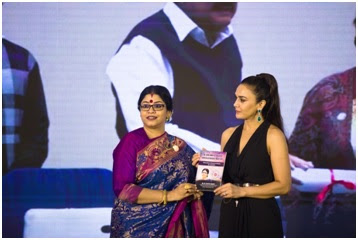 Dr. Sohini Sastri and Preity Zinta at the Book Launch

Talking about the book, Dr. Sastri said, “This book based on career astrology is first of its kind and shall help readers gain knowledge on how astrology affects their careers and professions, explaining the reasons for failure and methods to overcome them. This book will easily be available for readers online and in stores very soon.”

The book was launched in presence of several other prominent personalities from Bollywood and Television Industry that included actors Rashmi Desai, Anita Hassanandani, Karishma Tanna, Payal Rohatgi, TV Host Vikas Gupta and Singers Tony Kakkar and Meet Brothers who were also felicitated with awards for their contributions in the film & television industries.

Dr. Sohini Sastri is an internationally acclaimed Astrologer and holds a doctorate in Astrology from Victoria Global University, USA as well as D. Litt. in Astrology by National American University. Shehas won various national and international awards for her professional and social initiatives in society. She was felicitated with the prestigious “Champion of Change” award by the Vice President of India, Hon’ble Shri Venkaiah Naidu in the year 2018, and the “Brilliance Award” by the Governor of Uttarakhand, Hon’ble Baby Rani Maurya. She has recently been awarded the Pride of Nation Award by the hands of Hon’ble Defence Minister ShriRajnath Singh in New Delhi.

Arslan Goni’s meme on his character “Lala” is going viral! check it out here