Armaan Malik completes a hat-trick by singing his third number for Emraan Hashmi, after two chartbusters.

After “Daaru Wargi”, the explosive promotional number with Guru Randhawa, the producers of “Cheat India” are set to reveal “Dil Mein Ho Tum”, the first potential chartbuster from the film, on 26th December.

The quintessential romantic track, a song genre that’s popularly associated with Hashmi, is a re-composition of the epic Bappi Lahiri number in the Vinod Khanna-Anita Raj starrer “Satyamev Jayate” (1987). This was, in turn, based on Bappi da’s legendary Bengali track, “Chirodini”,  rendered by Kishore Kumar in “Amar Sangi” (1986).

32 years later, Rochak Kohli has re-composed the track retaining just the original hook. It has been written by Manoj Muntashir, and rendered by Armaan Malik, whose previous tracks for Hashmi, “Bol Do Na Zara” and “Main Rahoon Ya Na Rahoon” were colossal hits. In the film (and song), Hashmi has been paired opposite debutant Shreya Dhanwanthary.

Said Bhushan Kumar, “Emraan, Armaan and romance are a winning combination. This is not just another recreation. Rochak (Kohli) has beautifully recomposed the original in a contemporary manner giving it a major shelf life. Fans of romantic melodies are going to love it!”

Said Armaan Malik, “I am excited to be collaborating with Rochak for the first time. Emraan and I come together for the third time after two hits. Interestingly, most of my recreations have been Kishore da’s songs, so whenever I sing a new version of his songs I feel like his blessings are upon me. I have fond memories of this track. When I was a contestant at Sa Re Ga Ma Pa, Bappi da would keep humming this song and somewhere it has stayed with me ever since.” 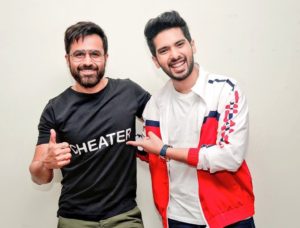 Anveshi Jain to play sexologist in her Telugu debut movie

Shop, Eat, Mingle and Be Merry at “The City Festival’ by Elpro City Square Mall