Skip to content
You are here
Home > Featured > Deendayal-Ek Yugpurush : Filming in many places of Allahabad including Anglo-Bengali College, Naini,

Deendayal-Ek Yugpurush : Filming in many places of Allahabad including Anglo-Bengali College, Naini,

The shooting of the film Deendayal–Ek Yugpurush , based on the life of the great leader of India ,Pandit Deendayal Upadhyay, is being shot at different places in the Allahabad. This is the fourth film of Dhiraj Mishra, a local resident of Pratapur near Allahabad, . The actor Imran Hasnee is in and as Deendayal Upadhyay in the film. The shooting started on 10th October,2018 and completed on 18th October  at various locations of Allahabad like Anglo-Bengali College, Naini, and Jhunsi.

Under the banner of Arius Creatives, the film Deendayal –Ek Yugpurush is directed by Manoj  Giri, the written and designed by  Dhiraj Mishra, the film is produced by Resham Sahu and Manikant Jha.

Pandit Deendayal Upadhyay was the forerunner of  Bharatiya Janata Party and was  the co-founder of the Bharatiya Jana Sangh. In addition to an active social work, participated in the Indian freedom struggle. After independence, the RSS was blamed for the death of Mahatma Gandhi, he worked day and night to clean up his image. He believed that after independence, he fulfilled the need for a strong opposition to keep the government in position. A few days after being appointed as RSS chief, he was found dead on the railway track in mysterious circumstances. Many people thought that this was a political murder, so the government had to compel the investigation, which was stopped in the middle. After so many  years also, his death is still a mystery. 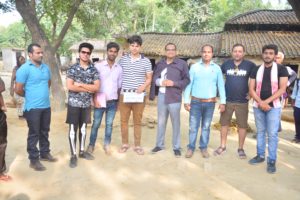 On this occasion, writer Dhiraj Mishra said that “the  film  Deendayal –Ek Yugpurush  will introduce the today’s youth  to the life of Deendayal Upadhyay ji. The film portrays the image of a strong Opposition with the struggle of independence movement of Deendayal ji.”