Vipul K. Rawal, writer of blockbuster films like Rustom, Iqbal, Mumbai Varanasi Express and many more is debuting as a director with the film “Tony”. Trailer and posters of the film were released last week. The film is about four psychology students who plant a camera in a church’s confession box and come across a serial killer named Tony confessing to murders to the priest. Cyril Dara claims that the entire Christian community is really angry with such a portrayal of Christians in the film and has filed a complaint against the filmmaker.

Director-writer Vipul K. Rawal in a statement said that “The movie is based on a Serial killer named Tony. Obviously, it will contain elements of his religion. My film has already been approved by the Central Board of Film Certification without a single cut and hence there is no question of changing the posters or withdrawing the trailer” 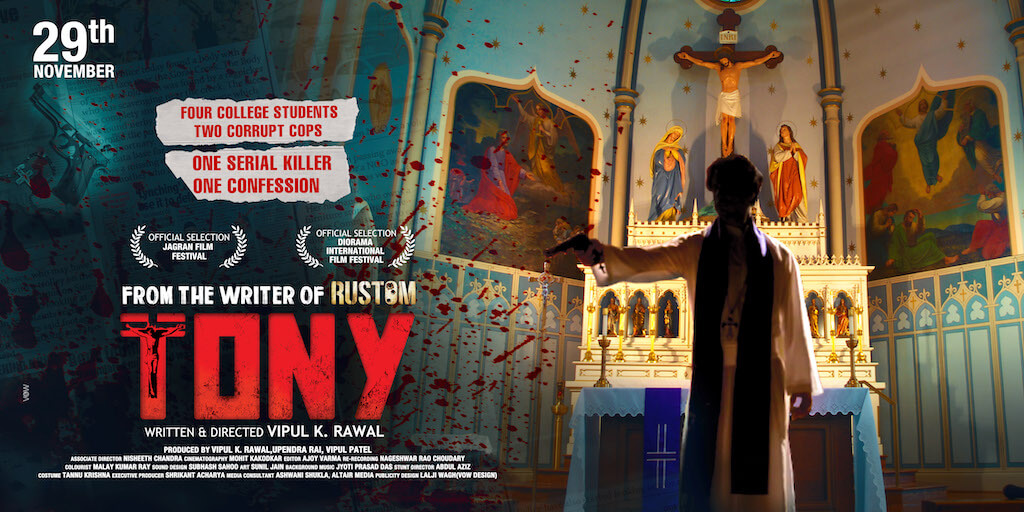 According to Cyril Dara, who filed the police complaint says, “I’m a secular person and I respect all religions. The trailer & posters are trying to create enmity between the Catholics and Protestants, which as an Indian citizen I cannot tolerate. It will hurt the feelings of the community. The film Tony is portraying a serial killer as catholic but I think such sinners do not have any religion. In my opinion, Vipul K. Rawal is not making the film with the right intentions but has some hidden agenda and ulterior motive with this film”.

Cyril Dara told us that the senior PI at the Agripada Police Station has noted their complaint and initiated an inquiry but hasn’t filed an FIR or even noted an NC. He also claims that many priests, bishops and churches are standing with him. According to him, Church and other Christian communities are ready to protest publicly but he is not in favor of spreading hatred and misconduct, so he stopped them and trying to stop the film in a legal and peaceful way.

Fight between the Christian community and filmmaker Vipul K. Rawal doesn’t seem to resolve easily. Vipul says, “In the first place, my poster and trailer have not hurt an entire community, but a fringe group of people who I feel is looking for some cheap publicity by piggybacking on my creativity. If Mr. Dara claims that many priests and bishops are in his favor, why doesn’t he give me their names and I will personally show them the trailer and ask them what exactly do they find offensive in it and I am ready for debate if required. I also request him to first watch the film before jumping to conclusions. I will not change anything until the courts order me. Even then, I am ready to fight against this out till the Supreme Court.”

Film “Tony” is about four psychology students who plant a camera in a church’s confession box and come across a serial killer confessing to murder to the priest. Life takes a bizarre turn when they meet TONY, the serial killer and go on a murdering spree with him. The film has Yashodhan Rana, Akshay Verma, Manoj Chandila, Mahesh Jilowa, Dhruv Souran, Jilan Belani and Kabir Chilwal in pivotal roles while the film is Written, Produced and Directed by Vipul K. Rawal.

Sanjay Kapoor  UNVEILS  more INTRIGUING Looks, Are these looks for his next film ‘Bedhab’?