Zee studios in association with Satish Kaushik Entertainment has launched the trailer of their upcoming Haryanvi masterpiece “Chhoriyan choro Se Kam Nahi Hoti” in Chandigarh. The film stars Satish Kaushik, Aniruddh Dave and Rashmi Somavanshi in lead roles under the direction of Rajesh Amarlal Babbar. The movie has been produced by Nishant Kaushik. 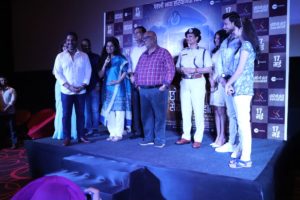 The film brings into light the need for Women Empowerment and the concept of Gender Equality. The event witnessed actors Satish Kaushik, Aniruddh Dave, Rashmi Somavanshi and Director Rajesh Amarlal Babbar , present to promote their movie.

During the trailer launch, prominent local heroes were felicitated which were women police officers and school kids, therefore furthering the social message of equality and empowerment.

Present at the event, Actor Satish Kaushik said, “I have two eminent motives to be a part of this movie, I want to promote Haryanvi film industry as well as propagate the social cause of it. I want every Haryanvi girl to take inspiration from ideals like Manushi Chillar, Geeta Phogat, Babita Phogat and many more so that they aspire to dream.”