Skip to content
You are here
Home > Featured > Atharva Foundation organised “A Tribute and salute to Soldiers & Mumbai Police who saved Mumbai from the 26/11 Terror Attack.

Atharva Foundation had organized a patriotic program- “A Tribute and salute to Soldiers & Mumbai Police who saved Mumbai from the 26/11 Terror Attack.” It is an initiative by Atharva Foundation & Swatantra Veer Savarkar Udyan Samittee This program aimed to raise awareness among the youth about the armed forces and Police Force’s supreme sacrifice. It inspired the young people to take pride in these brave men and follow their path to serve their country. Family members of martyred soldiers were felicitated on this occasion followed by the patriotic cultural programs. 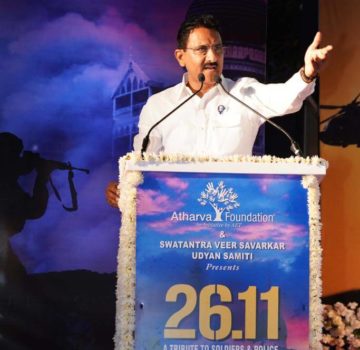 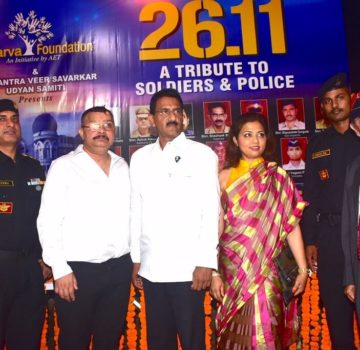 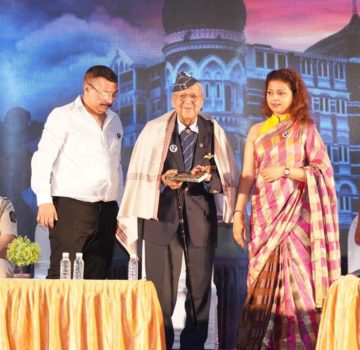 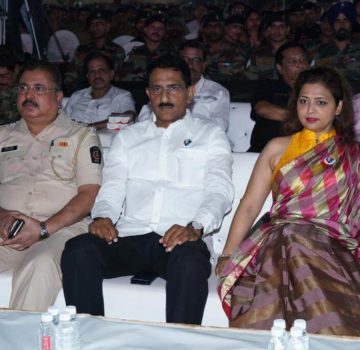 On this occasion, Chairman of Atharva Foundation Sunil Rane quoted, even at our 100th birth we can’t repay the sacrifice of these valiant soldiers and Mumbai police. When the city was all dark and disheartened, there were these people who fought selflessly. They had proved soldiers and polices were never off duty. I appeal to each one of you to take initiative for better India.

11 years have passed but the horrifying and heart-wrenching memories of 26/11 still frighten the hearts and minds of people. On November 26, 2008, 10 Pakistani terrorists arrived by sea route and opened fire indiscriminately at people killing 166, including 18 security personnel, and injuring several others, besides damaging property worth crores. The ATS chief Late Hemant Karkare, Army Major Late Sandeep Unnikrishnan, Late Havaldar Gajendra Singh, Mumbai’s Additional Police Commissioner Late Ashok Kamte, Senior Police Inspector Late Vijay Salaskar, Sub-Inspector Late Tukaram Omble, Late Shashikant were some prominent names who martyred but exhibited indomitable spirit in the face of the enemy. Indian Army, NSG Commandos & Mumbai Police keep the city alive by eliminating the fear out of people and giving their precious time and effort for protecting everyone. At Home, their own families constantly adjusted with lack of their presence maybe that is why the city never sleeps. The City is always safe even at the Darkest Hour of the Night.

A floral tribute was paid to the Martyrs who laid down their lives while fighting terrorists and their Families was Honoured & Felicitated on November 26, 2019, for their Supreme Sacrifice. Atharva Foundation revealed five brave hearts stories who martyred in the 26/11 terrorist attack. Renowned personalities from armed forces brought life to the inspirational stories of soldiers through their recitations, which were accompanied by an audiovisual on each soldier. Patriotic songs had filled the heart with nothing but respect and love for India.

This program was attended by Government dignitaries & officials, martyrs family members, ex-servicemen from armed forces, soldiers, NSS & NCC students, police personnel, citizens and youth. This initiative was an opportunity for all of us to come together and show the armed forces our respect and deep gratitude.

Atharva Foundation is the brainchild of Shri. Sunil Rane, Chairman Atharva Foundation. Our aim is to Impart Education and Training to women, children, and youth so that they can live a self-reliant life of dignity and respect. Atharva Foundation is committed to work for the noble initiatives such as Girl Child Education in Rural Regions of India, Help to Families of Martyrs, Women Empowerment and promoting Sportspersons.