Skip to content
You are here
Home > Featured > Annu Kapoor launches the first poster of ‘Hum Do Hamare Baarah’ in Mumbai, the film addresses the issue of population explosion

According to a recently published report by WHO, India is set to take over China and become the most populous country of the world next year!. In our country population explosion has always been a debatable topic. Some term it bane of our society while others see it as a boon in terms of every growing work force. But experts have been warning since long that rapidly increasing population of the country has it’s own harmful effects as it is contributing in increasing the poverty and unemployment of the country. Despite all these debates, Indian cinema has seldom touched the topic but the cinematic silence regarding the subject has been broken with ‘Hum Do Hamare Baarah’. 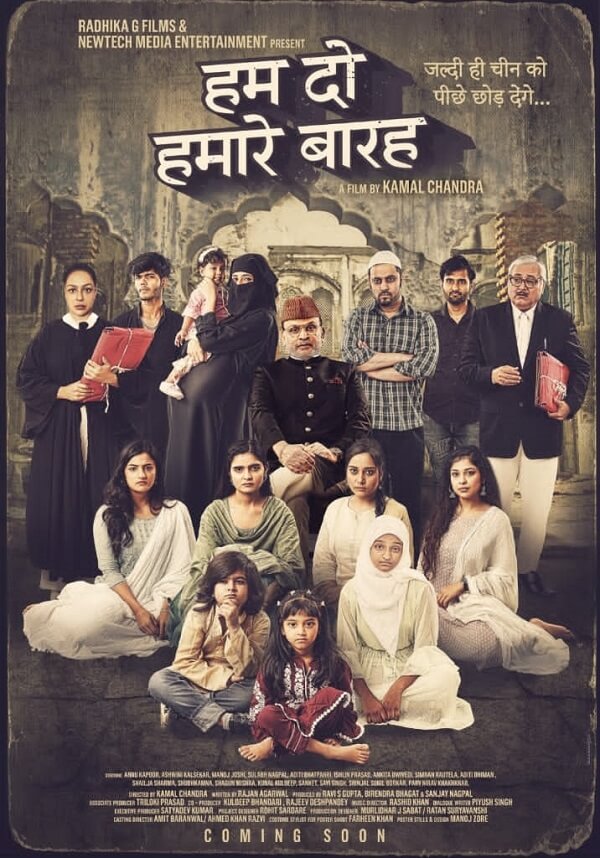 The first look poster of ‘Hum Do Hamare Baarah’ has been been released today in Mumbai in the presence of the cast and crew of the film. The ‘over populated’ first poster of the film reflects upon the concerns the movie is trying to depict. It also mentions in Hindi ‘Jald hi Cheen ko bhi peeche chhod denge’ which means that ‘We will soon leave behind China also”.

During the powerful poster launch of the film the lead starcast of the film including Annu Kapoor were also present. The film has been produced by Ravi Gupta, Virendra Bhagat and Sanjay Nagpal. Kamal Chandra has directed the film while Rajan Agrawal has penned the story very beautifully. Satyadev Kumar is the Executive Producer of the film.

During the launch of the first poster of ‘Hum Do Hamare Baarah’ prolific actor Annu Kapoor mentioned that talking about population explosion through films is very necessary and hence he is happy to be part of the film which has touched the most relevant topic of our times.

Annu Kapoor further said, “Population explosion has its own set of problems. There were instances when attempts were made to control the population. In such cases laws or using force doesn’t work. The need of the hour is that people should be made aware of the related problems and they themselves should realize their duty towards the society and the country. I think then only we can get some kind of solution to such a humungous problem”.

Reflecting upon the importance of the subject of the film, Director Kamal Chandra said, “Population explosion has always been a worrisome trend in our country. We all need to think about the side effects of ever increasing population in a rapid manner or else it will be too late for us all. Our film not only talks about the current problems related to population explosion but it makes you think about our collectively future too. And that is the beauty of the film”.

Producer Ravi Gupta was too ecstatic during the first poster launch of ‘Hum Do Hamare Baarah’. He said, “I was appalled to know that no Hindi or Indian movie has ever talked about the problems related to population growth in our country as a central theme in the film. I always believed in making socially relevant films therefore I decided to produce this film. I am glad that I did!”.

Even though the poster of the film has been revealed, the release of the film in cinemas hasn’t been announced yet and for now it has been kept under wraps. The makers also informed that they will soon start the shooting of the film in various cities. Watch this space for more!

Seerat Kapoor to fly Hyderabad, amidst Lockdown for an event

Athiya celebrates her birthday on sets of Motichoor Chaknachoor with Nawazuddin Siddiqui and cake made of Motichoor .