Skip to content
You are here
Home > Featured > And it’s here, the Shakeela 2019 calendar is 12 of the quirkiest, tongue in cheek fictional movie posters starring Richa Chadha!

What does “Paapi Pappi”, “Maneater”, “Mard Ko Dard Hoga” and “Chatri Ke Peche Kya Hai” have in common? They’re each representing a different month in this one heck of a unique calendar that the makers of the Shakeela biopic have now unveiled. 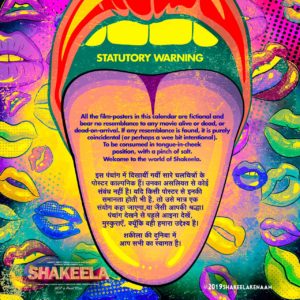 The posters have been designed as a fictional movie poster for each month with hilariously cheeky titles and the lead actress of Shakeela Biopic, Richa Chadha in a different look for each, as a ode to the pulp movies of the late 90s, the era in which Shakeela herself dominated the screens. Based on the life of the adult film star of the south film industry, the film helmed by award winning director Indrajit Lankesh becomes the first film to have a calendar of its own.

Take a look at the calendar below,

I am all for new tunes, lyrics and songs on my YouTube channel: Asha Bhosle

The Tale of India’s Unsung Heroes UNSTOPPABLE at the Box Office Journey Parmanu-The Story of Pokhran grows an astonishing 74% on its second Saturday!!