Skip to content
You are here
Home > Featured > “Amit ji’s tweet about ‘The Big Bull’ has just been an overwhelming surprise,” says Anand Pandit

Superstar Amitabh Bachchan has expressed his pride and joy over the massive opening of son Abhishek Bachchan’s ‘The Big Bull’ in a tweet and has taken the producer of the film, Anand Pandit by surprise.

The tweet read, “The Pride of a Father..
THE BIG BULL.. biggest opening of the year..”. 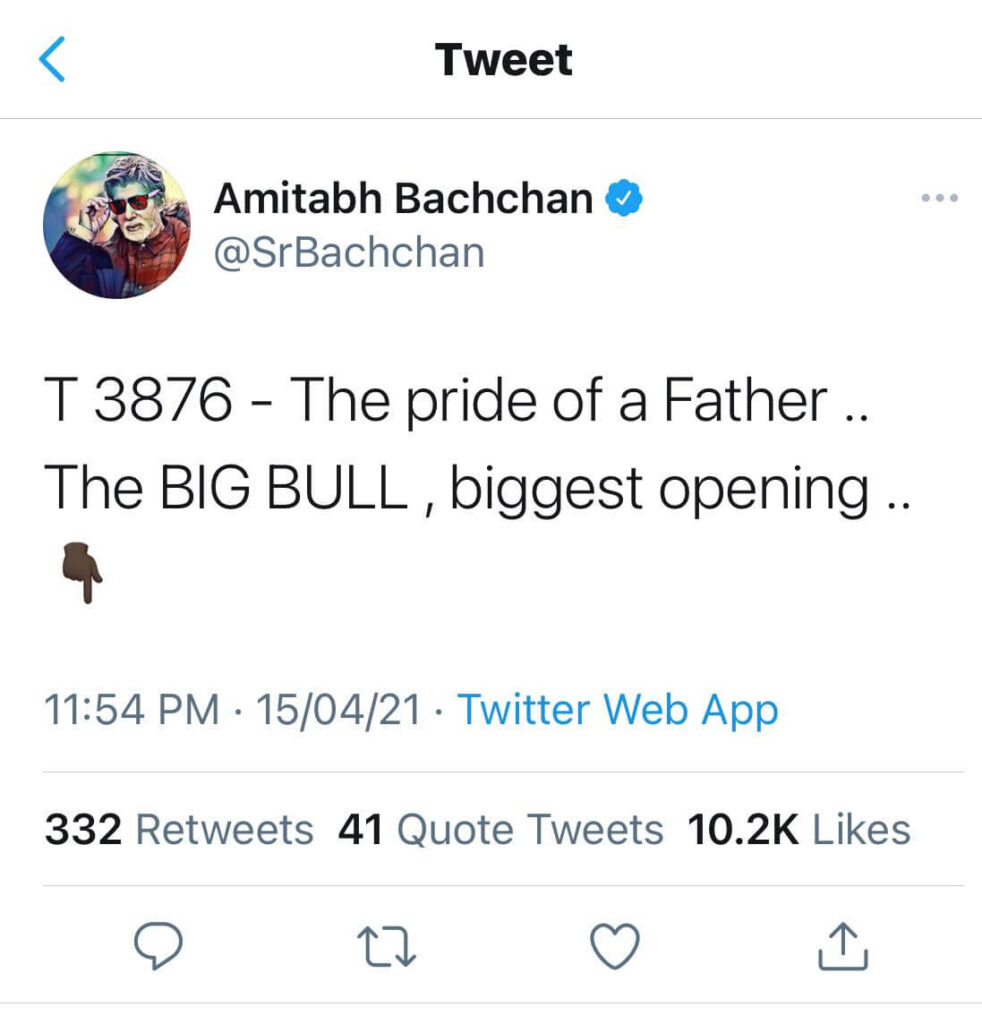 Says veteran producer Pandit, “Even though I share a very close bond with both father and son, this tweet really overwhelmed me. That the success of the film has brought Amit ji so much joy, means a lot to me. Amit ji is a very private person but he is also very generous with praise for anyone whose work he likes and not just Abhishek’s. He is known to send hand-written notes to young actors who have impressed him. I still remember how deeply he was moved by Vicky Kaushal in ‘Masaan’ and quickly sent a congratulatory message to his father Shaam Kaushal. He looks at every performance with a very keen eye and his appreciation of ‘The Big Bull’ makes me really proud.

Be it Abhishek Bachchan’s performance in the ‘Yuva’ (2004), ‘Guru’ ( 2007) or ‘The Big Bull,’ Bachchan Senior has not just been an appreciative parent but also a deeply observant critic. Says Pandit, “I still remember him commenting on the swing scene in ‘Guru’ where the hero and his soon-to-be-bride have a life changing conversation even though they don’t know it yet. I am looking forward to talking to him soon to find out what specific moments he liked in ‘The Big Bull.”’

Since its release on Disney+Hotstar on April 8, the film has been declared the top OTT original of the week with over 5.8 million streams. Directed by Kookie Gulati, the film also stars Nikita Dutta, Ileana D’Cruz, Sohum Shah, Ram Kapoor and Saurabh Shukla.

After Chamdi Udhed Di, Akash Mihani aka Shivaay is back with his second rap song, Brat Anthem