Skip to content
You are here
Home > Featured > Actor Karan Aanand harsh reaction on statement given by Mehbooba Mufti .

A group of unidentified men forcibly hoisted the Indian tricolour at Jammu office of the Peoples Democratic Party on Saturday, reported Greater Kashmir. The incident took place a day after party chief Mehbooba Mufti said she will not unfurl the national flag until she brings back the flag of the erstwhile state of Jammu and Kashmir. Yes on Friday Mehbooba Mufti said she will raise the Tricolour only when the J&K state flag is also restored, the BJP demanded her arrest saying Mufti’s remarks were “seditious”.

For every Indian, the tricolour is the pride of the country, and if someone raises the question on it, then surely it is natural to react in sharp fashion. Bollywood Actor Karan Anand is deeply saddened by the insult of the country’s tricolour. And has expressed his anger on the statement given by Mehbooba Mufti and also express his love for the tricolour in his own words. 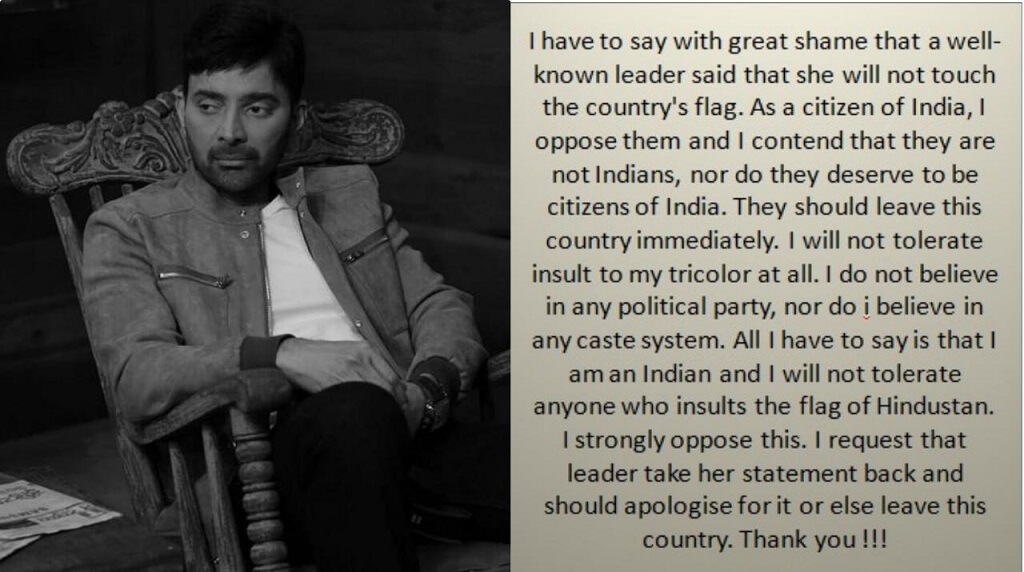 Karan says “I have to say with great shame that a well-known leader said that she will not touch the country’s flag. As a citizen of India, I oppose them and I contend that they are not Indians, nor do they deserve to be citizens of India. They should leave this country immediately. I will not tolerate an insult to my tricolour at all. I do not believe in any political party, nor do i believe in any caste system. All I have to say is that I am an Indian and I will not tolerate anyone who insults the flag of Hindustan. I strongly oppose this. I request that leader take her statement back and should apologise for it or else leave this country. Thank you !!!”

On the work front, His first Bollywood movie was ‘Gunday’, followed by ‘Kick’, where his action scenes were much appreciated, but he truly received recognition for his spy-act in ‘Baby’. Recently, he had a cameo in Madhur Bhandarkar’s ‘Calendar Girls’. After which he played the lead character in ‘Lupt’, which was much appreciated. Yuvraj’s character in the 2019 film ‘Rangeela Raja’ received a lot of love from fans. The actor has several big banner projects. Recently he completed the shooting of his film ‘It’s over’ based on lockdown. This will be releasing soon.

The sultry & fierce, Sherlyn Chopra finally unleashes the rapper within her with the release of her debut rap single, Vote Daal!